My great great grandfather, Ephraim Smith Leach was born in 1836 in Connecticut, but grew up in Enosburg Falls. His parents were Ephraim and Sarah E. (Smith) Leach. His siblings were: Sarah Elizabeth Leach, born 1830; Jay Smith Leach, born 1836 and Harriet Emmons Leach born 1837. 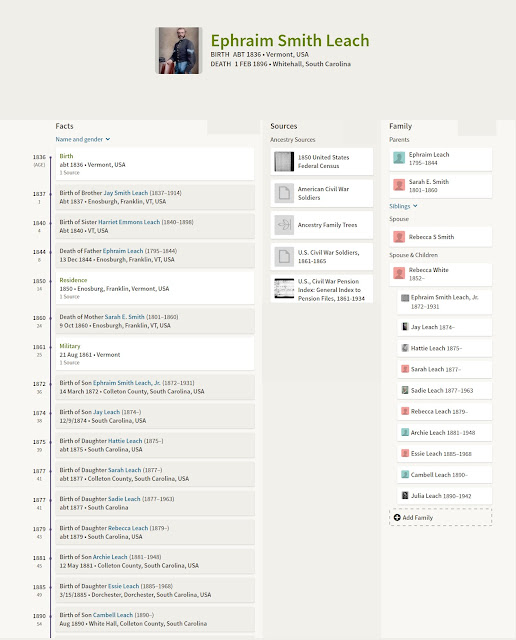 Ephraim’s family history was interesting too. He was a Mayflower descendent; one of his paternal grandmother’s was the sister of Myles Standish. His father, also named Ephraim Leach, fought in the American Revolution.

The Union Regiment History indicates that the 5th Infantry was “Detached from Army for duty at New York City and Kingston, N.Y., August 14-September 16”. Ephraim was apparently arrested and held at a Camp near Kingston, N.Y.On September 7, 1863, he wrote a letter asking that he be released from arrest or given a copy of the charges against him.

Although he was found guilty of various charges, due to “apparent previous good character and conduct…and the loose and negligent manner in which the officers of the regiment were permitted to quit their post of duty for their meals…and the peculiar circumstances under which the accused was placed at the time”, it was recommended that the usual sentence of death be commuted to forfeiture of pay for 90 days. The record of the case with the recommendation was forwarded for orders of the President concurring in the recommendation.

The last page of the official copy of the record indicates that the approval was so obtained by the “signed A. Lincoln” on February 10, 1864. The Lincoln Logs, found on line at http://thelincolnlog.org/view/1864/2/10, indicates “President devotes morning to courtmartial cases”. 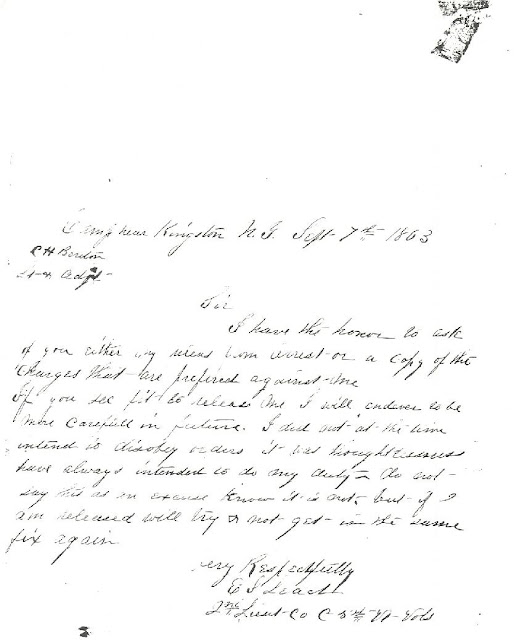 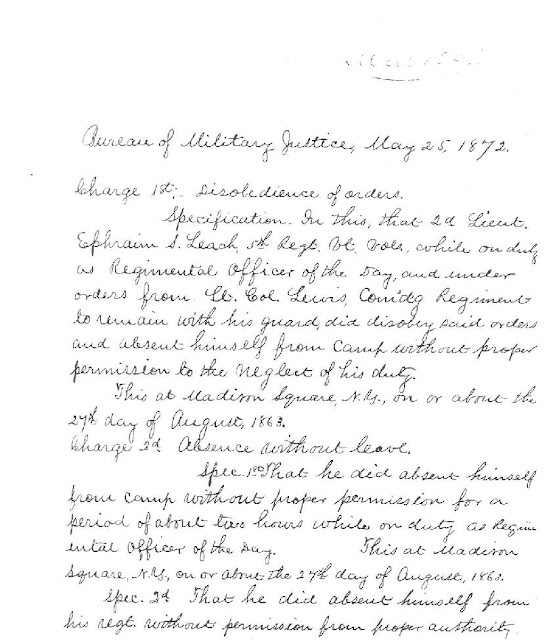 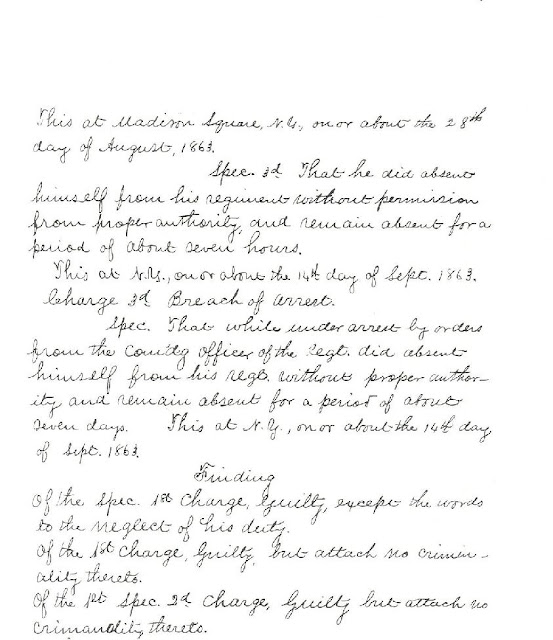 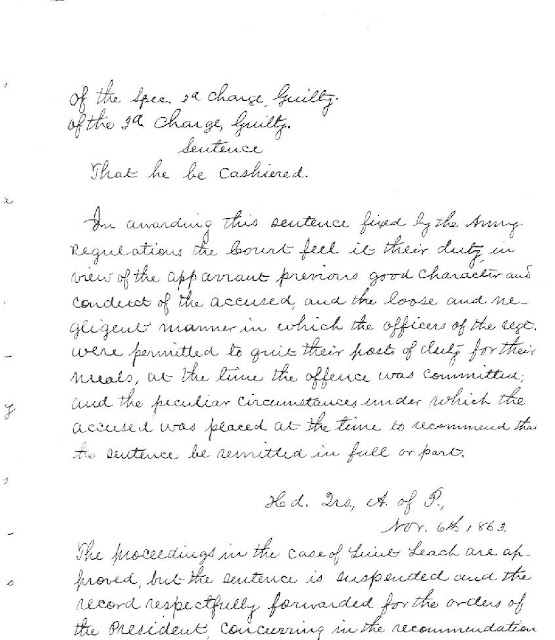 Ephraim’s wife, my great great grandmother, Rebecca White, was a former slave in South Carolina on the Middleton Plantation in South Carolina. Arthur Middleton was one of the signers of the Declaration Of Independence. In 1869, the South Carolina constitution gave equal rights to its citizens without regards to race or color. Such rights included the right to "intermarry." However, ten years later, in 1879, two years after my great grandmother was born to this union, South Carolina passed a Miscegenation Statute which declared that "Marriage between a white person and an Indian, Negro, mulatto, mestizo, or half-breed shall be null and void." That was followed by a State Constitutional amendment to the same effect. 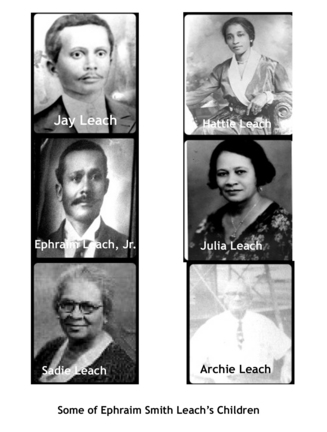 In 1967, the US Supreme Court in Loving v. Virginia, 388 U.S. 1 (1967) declared such laws a violation of the US constitution's equal protection laws.Interestingly, the 1880 census record next to Ephraim Smith Leach’s name has the check mark for married crossed out. 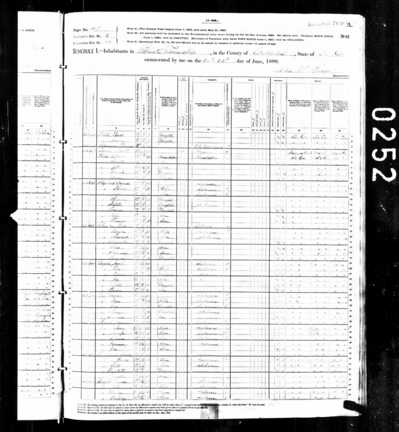 Although my great grandmother, Sadie Leach Bedell, was still alive when I was a kid, I did not know about any of this then. My family never talked about Ephraim. The fact that he was a white man was a dark family secret.  Although looking at my great grandmother she appeared to be white herself.  Later, I was able to find out all of this information because a letter from my great aunt, who we called Auntie Bee, peaked my interest in finding out more details about my family history.  I also found out that Sadie used to pose as a white woman in order to travel comfortably by train into the deep south.
Although I have not been able to locate the burial ground for Rebecca White, I know that Ephraim Smith Leach is buried at the Beaufort National Cemetery in Beaufort, South Carolina.
Originally published at: http://ireport.cnn.com/docs/DOC-585745 April 6, 2011


Leach also served as the postmaster of White Hall. 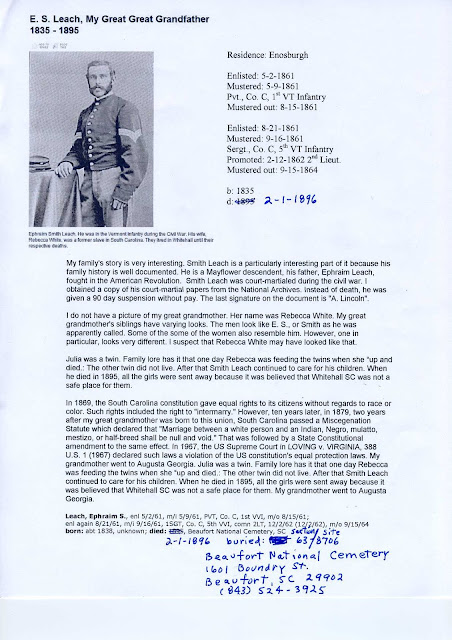 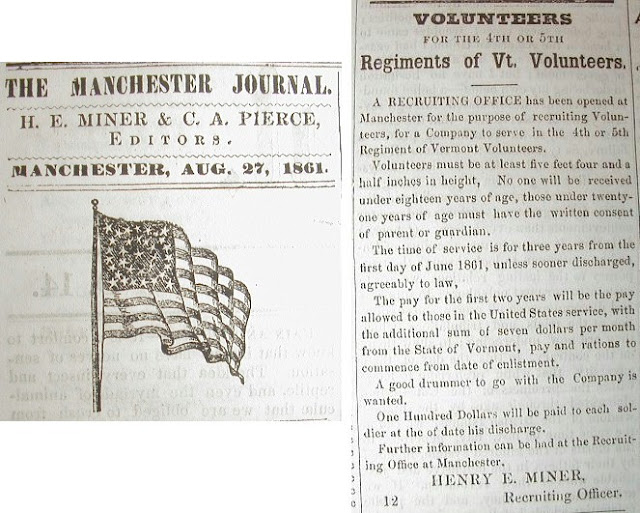 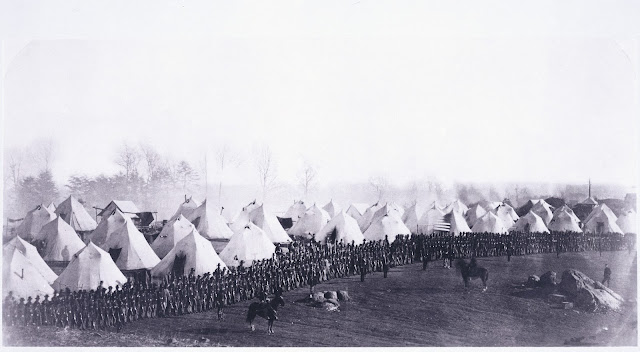 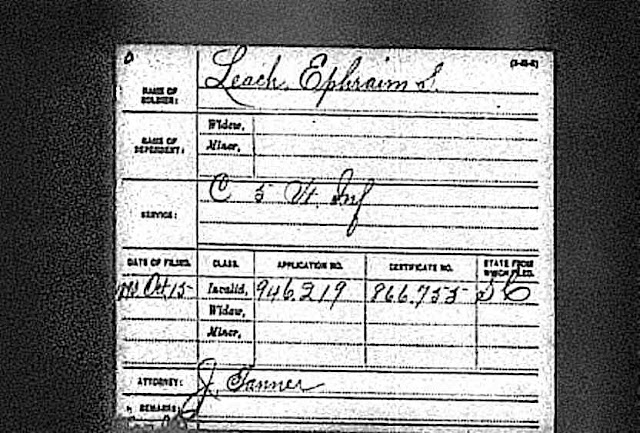 I discovered a book that contained the purported explanation for E.S. Leach being awol which lead to his court martial.  According to: Don't Shoot That Boy! Abraham Lincoln and Military Justice (Hardcover – August 21, 1999) by Thomas P. Lowry (Author):

“The uncertainties of mid-Victorian transport are seen in the story of Second Lieutenant Ephraim Leach of the 5th Vermont.  His regiment was on a steamboat in New York Harbor. There was no officer's mess, and Leach went ashore for breakfast: the boat left for Washington. D.C. He immediately went to the quartermaster's office in New York City who refused transportation. After several hours he somehow obtained sufficient funds to buy a private ticket. He knew that his regiment was ordered to Culpeper, Virginia, and he was there waiting for them when his comrades arrived. In spite of his efforts, which brought him to Culpeper ahead of his regiment, he was cashiered for being absent without leave. To this sentence, the court added a plea of clemency.  General Meade agreed, and suggested the loss of three months pay as an appropriate penalty. Holt took no position, but Lincoln did, Under Nicolay's "General Meade's recommendation approved:' appears the President's signature.”

On the 15th of September, 1864, the original members of the regiment who had not re-enlisted and whose time had expired, 107 in number, were mustered out of the service and returned to Vermont. E.S. Leach was one of them.

In the 1880 census for Blake Township in Colleton County, Smith Leach was listed as a white male farmer living with Rebecca White, a black female housekeeper, and their mulatto children - Smith White, J.H. White, Sarah White and Rebecca White. Initially, the children are listed by their mother's last name. Beginning with the 1900 Federal Census, all are listed by the last name Leach.

The eldest son, Ephraim Smith Leach Jr., was a constable in Walterboro and then a farmer in Blake. When he married Isabella Simmons, he fathered Willie J. Leach, who moved to Charleston in the 1930s where he started working in the gardens at Magnolia. Johnnie Leach, the son of Willie J. Leach. Johnnie Leach was a combat engineer in the Philippines during World War II before he joined the garden staff at Magnolia in 1946. He lived in one of the cabins at Magnolia where he raised his family.

Johnnie Leach still works at Magnolia along with two of his sons, Isaac and Theodore Leach, and two of Isaac's sons, Jackson and Brandon.