Do You Believe in Santa Claus? The Family Christmas Tree

I haven't had a Christmas Tree for several years now. Partially because I imagine my cats deconstructing it as I sleep; otherwise because I am just not feeling the spirit enough to take the time out to set one up.

According to the 1870 census, John Chiles was born in 1854 in Missouri. By 1870 he was married to Charlotte Bellinger and living in Lockhart, Texas.  Just about everytime I go to Texas I go to Lockhart, Texas.  There is fabulous BBQ there, but more importantly, I have family history there.

Around 1977, I made a trip to Lockhart with my mother, Thelma Washington Gibson.  At the time her cousin Lex Hudspeth was living there in an old house. 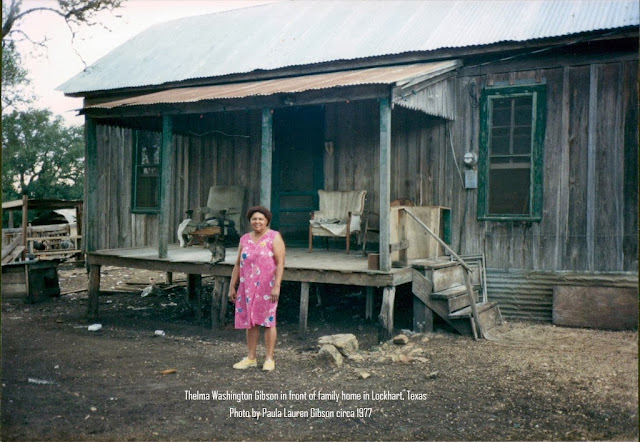 I remember being completely amazed by the pot belly stove in the middle of the house, next to what I guess was the area between the kitchen and the living room.

I also remember that the walls were black probably from smoke from the stove. There was a painting that someone had painted on the wall that I admired. Lex said I could have it and proceeded to pull it off the wall. Underneath was the most beautiful flowered wall paper that could no longer be seen under the smoke covered walls.

Anyway, looking into the history of the Lockhart house lead me to a discovery about John Chiles.  That house was located at what would eventually been known as "1189 Farmer St, Lockhart, TX 78644." I knew that Lex Hudspeth was living in the house, but I wanted to know who lived there before him.

Starting with the 1870 Census, I was looking at John Chiles and Charlotte Bellinger.  While attempting to figure out a street name, I turned back a page in the Census and immediately noticed another Chiles family, only this one was white. Going back to 1860, I saw that the white Chiles were still present.

This is the story that I was able to figure out, so far:

John Chiles was brought from Missouri as a child slave by Dr. P.B. Chiles.

As stated above, John Chiles was born in Missouri in 1854, about seven years before the start of the Civil War.  The trail from Missouri to Texas had already been established by the DeWitt Colonists. The route probably left Missouri, as did Dewitt previously, from "St. Charles County down the Mississippi River to New Orleans. From there they traveled by schooner down the coast in the Gulf of Mexico entering Matagorda Bay between the Matagorda Peninsula and Matagorda Island eventually anchoring in Lavaca Bay at the mouth of the Lavaca River. This route would be commonly used by numerous immigrants to the colony, a journey which sometimes took over 3 months...The party [would then join] the settlers at Old Station on the La Vaca where [there were] facilities to transport and receive colonists."

According to a "Note from unknown; Isabel Florence Chiles Maltsberger Collection":

"P.B. bought the first piece of land he bought there on 26 April 1845, and bought lots more after that.  He surely was a land owner of large means, and he had an awful amount of land in and around Lockhart, as did the Heads.  The Heads were living in Bexar County in November 1850 and are in the census.  They left Missouri to go to California in the gold rush of 1849, but evidently got sidetracked in San Antonio."

The 1860 Census happened to have counted slaves in the household, and therefore I took a look at that Census for P.B. Chiles. Once I started figuring dates, I could match alleged years of birth with the information that I already knew about John Chiles' family. Looking at the 1860 Slave Schedule for P. B. Chiles to see if the ages matched the known ages for the Black Chiles. They did line up for the Chiles and even for the Crunk family. 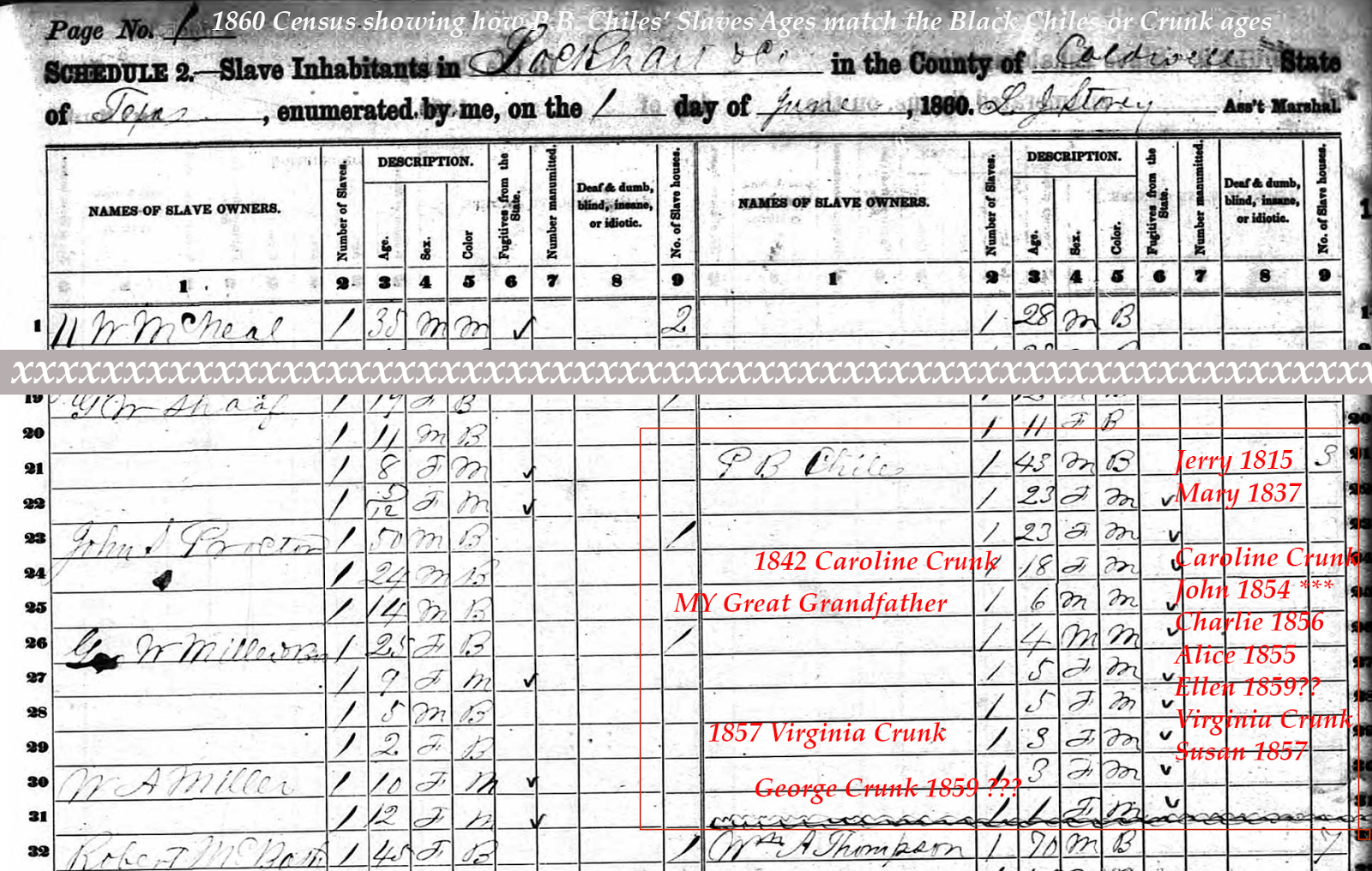 There was a 23 year old female slave that I have not been able to confirm.  At the same time, the age I had for Ellen Chiles does not match the age of the slave schedule, and although the age of George Crunk matches, the schedule indicates "female" not "male". That may be because of the way George may have been dressed when the census taker was present.

As suggested by the article below, former slave Caroline Crunk continued to live with the white Chiles as a "cook" after emancipation.

Interestingly enough, some of John Chiles' Daughters have the same names as the White Chiles daughters: Florence and Birdie 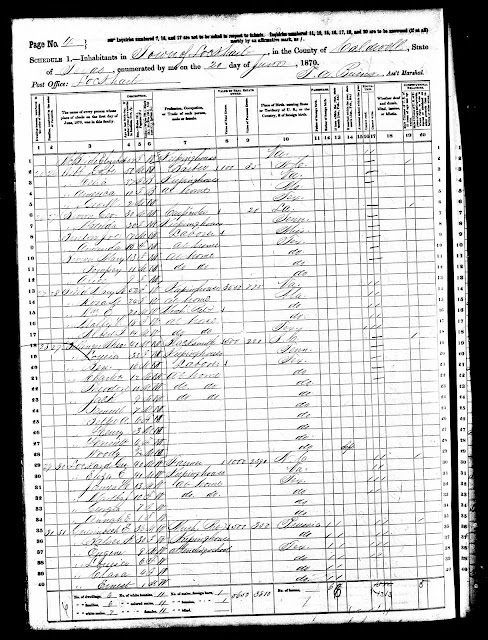 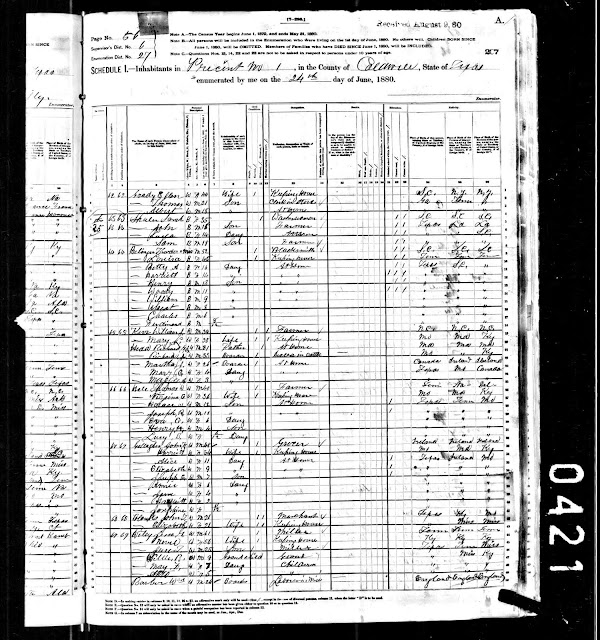 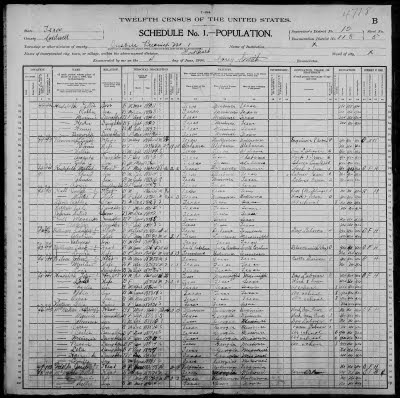 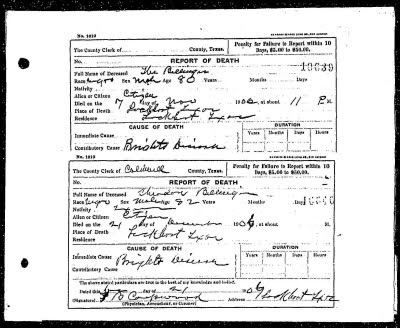 Although in my entire life I have lived in several places, there is really only one place that I call "home".  The year was 1964.  I remember the first time that I went to the Farralone house with my brothers.  We were living in a rental on Roscoe, but my father had purchased a house up the hill.  We decided to walk up the hill and visit our new home.  After climbing the hill, we were thirsty. So it made sense to us to get some water out of the hose.

We were clueless at the time, that our family was about the become the original "Hughleys" - a 1998 TV show about a black family moving to "West Hills, a predominately white neighborhood within the San Fernando Valley". Only this was 1964, and the part of West Hills where we moved was still called Canoga Park.

Back to the water hose.  So there we still in what would be our front yard after the landscaping got put in, when a loud booming voice yelled "You guys get out of here..."!  That booming voice belong to actor Mark Russell who was about the find out that his new neighbors were black.  "This is my daddy's house, I shot back." Mind you, I had lived in an interracial neighborhood in Westbury, New York.


Last time I was visiting there, I found a photograph of the original owner, a woman named Aline Cover.


Ironically, my mother's family was one of the first or maybe even the first black family to move into that house.  The 1940 United States Census shows that the neighborhood was completely white.

Below are photos of some of the other Gibson/Washington family homes.