The NAPFE's history reveals why I always say that my personal black history is American history:

It begins in the late 1890's and early 1900's when the Railway Mail Service was the most important phase of the postal service outside the area of first-class post offices. Nearly every railroad which passed through or near sizable towns had a mail car. The clerk in the mail car was responsible for receiving and dispatching mail in accordance with official schemes, schedules and special instructions. A great majority of the railway mail clerks were black. The Railway Mail Service was operating with dangerous wooden cars which guaranteed casualty in train wrecks. As a result, competition for the hazardous positions was slight and blacks were more readily hired as railway clerks until the railways conversion from wooden to steel railway cars in 1913.

With the advent of steel cars, a concerted effort was made to eliminate black railway mail workers. Since the Railway Mail Association excluded blacks from its membership, black workers did not have the benefit of an industrial organization to appeal to for their defense. This was the situation facing black workers when a call went out to black railway mail clerks in August 1913 to convene in Tennessee in October for the purpose of joining forces to combat the discrimination they were encountering.

Thirteen states were represented at that first meeting on October 2, 1913 at the foot of Lookout Mountain in Chattanooga, Tennessee when the National Alliance of Postal Employees was founded. The major concerns of that founding meeting were: to provide a beneficiary department and an insurance department to enable black railway clerks to make suitable provisions for their families; to launch a national journal dedicated to the interests of black railway mail clerks; and to establish means to effectively present their grievances and petitions to the Post Office Department.

In 1923, the National Alliance became the first industrial Union in the United States when it opened its membership to any postal employee who desired to join. 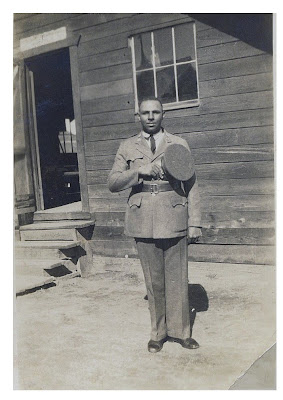 M B PATTEN IN POSTAL UNIFORM

As reported in the THE RED BOOK OF HOUSTON [a compendium of social, professional, religious, educational and industrial interests of Houston's colored population which was published in 1915]


"The National Alliance of Postal Employees, an organization designed to protect the rights and privileges of Negroes in the Postal Service, was originally projected and fostered by the Negro Railway Postal Clerks in Houston, Texas. As soon as the Democratic administration of President Woodrow Wilson went into power, an agitation began among some persons in the postal service having for its object the curtailment of the privileges of the Negroes employed in this service. The agitation became so strong till it was thought that many Negroes would be summarily dismissed from the service, others reduced in grade, and still others humiliated by practices which were suggested to the officials by certain organizations of white employees, such practices designed to place Negroes in the smaller and less important assignments." 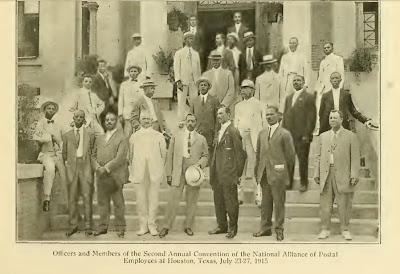 "To offset this agitation and take steps to protect their interests, a meeting was held in Houston composed of the best thought amongst the Negro clerks of this city. The meeting was suggested by Clerks Mims, Patten, Sweatt, Young and others, who finally got the men together for the first time in the office of T. H. Fairchild, a former clerk who had resigned and was in the real estate business. This meeting was held May 12, 1913, at 7 :30 p. m., and was attended by Clerks Mims, Sweatt, Brown, Taylor, Keeling, Young, Dod.son, Robinson, Glover, Rutledge, Southwell, Smith, Jessie, Sloan, Jones, Ayres, Patten." 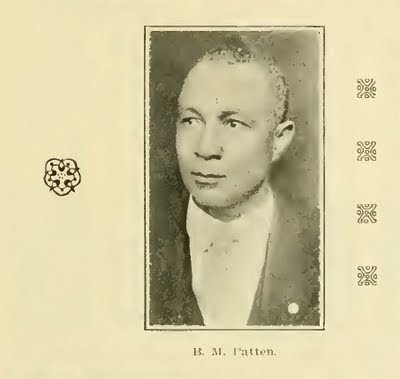 "From this meeting grew the Progressive Postal League, which concern projected the Chattanooga convention which founded the National Alliance of Postal Employees. Henry L. Mims was elected temporary president of the first meeting in Houston; T. R. Brown, secretary ; J. L. Sweatt, treasurer. At the Chattanooga meeting Henry L. Mims was elected national president; R. L. Bailey of Indiana, secretary; A. H. Hendricks of Georgia, treasurer; C. B. Shepperson of Arkan.sas, vice-president; B. H. Holerman of Louisiana, editor. H. L. Mims and M. B. Patten of Houston and J. R. Thomas of San Antonio were delegates to the Chattanooga meeting. The same clerks with G. N. T. Gray of Ft. Worth and J. M. Richardson of Denison, Tex., were representatives to the St. Louis convention in 1914, which re-elected Mims president for a second term. The organization is now in a prosperous condition and is recognized as the spokesman for the Negro railway postal clerks by the Postoffice Department."

It would turn out that my great grandfather, Mason, who die from injuries sustained in a railroad accident.

The monies from the accident were spent to send my great aunt, Thelma Patten Law, to medical school.